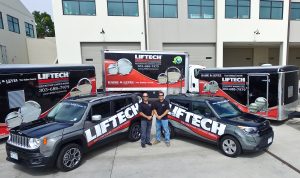 Many good friends can’t (or shouldn’t) work together. Too often, failed partnerships end in failed friendships. Fortunately for Liftech co-owners Darren Crotchett and Brian Lehnerz, their friendship has only grown stronger in the years since they decided to run a company together. Liftech, a company that specializes in repairing and stabilizing concrete, has literally become the cement (didja catch that? CEMENT!) that holds them together.

So how did a chance friendship transform into a strategic partnership? And how do they make their partnership work? To find out, read on.

Act One: They Meet

When Darren was planning his move from California to Colorado in 2004, he needed a local realtor to help him find a house. Looking online, he found Brian (who at the time worked at Keller Williams) and enlisted his help. When Darren flew in, Brian picked him up to go look at all the houses he’d found – he’d printed out an impressive stack of listings – and Darren promptly rejected all but two, effectively knocking out the entire morning’s agenda. Since it was only 9:30am and the first appointment was now at 1pm, Brian suggested going somewhere to get a beer. After several hours of conversation (and more than one beer), they headed over to the appointment. As it turned out, it wasn’t the right house, but the newly listed house across the street was. With Brian’s help, Darren put in an offer and moved in a month later.

Shortly thereafter, Brian invited Darren to a client appreciation barbecue at his house. It was then they realized they were going to be *real* friends. Says Darren, “We’ve always gotten along really well. And easily.”

Brian adds, “And we trust each other, which is huge.”

In the 14 years since they met, their friendship has grown. They’ve been through a lot together. During a vacation the pair took to Costa Rica, Darren even served as a mobilizing force in helping Brian meet his wife, Brenda.

During that same Costa Rica trip, Darren was coming to terms with the fact that he was frustrated with homebuilding. While in many ways he still loved it, he felt it was time to move on. After they returned from Costa Rica, Darren got his real estate license and started buying and selling houses. But something was still missing. Darren recounts, “So I’m not doing any more homebuilding, and I really have to find a niche business that’s in construction. Because I’m not good sitting behind a desk. I’m not good doing anything else if it just can’t be somehow in construction. And everything’s already been done. What am I gonna do – be a bathroom remodeler? Be a plumber? No offense to any of those trades, but there’s a million of them. So I dug deep.”

As it happened, the garage floor in Darren’s house in Castle Pines had begun to sink. So Darren started looking into mudjacking, thinking that would be the likeliest solution. Says Darren, “In looking into mudjacking, I came across these obscure entries about polyurethane concrete raising.” His interest piqued, he started researching it more thoroughly. He explains, “It was kind of a secretive process. It was under patent protection for a long time – till 2007. Then the patent fell apart and companies started experimenting with it on the East Coast.” Eventually he found an opportunity to get some hands-on experience working with one of those East Coast companies. When he returned home, he “decided to figure it out.” With his background in construction and the extensive research he’d done, he was confident he could make it happen.

Act Three: A Partnership Is Born

Darren founded Liftech in August of 2012, doing better than he expected during his first year. The business seemed like it had promise. Simultaneously, Brian had started feeling burned out on the real estate business. So, a year later, Brian approached Darren and asked, “How’d you like a partner?”

Brian tells it this way: “So this guy’s got an awesome product. He’s got a good work ethic. He knows how to do this stuff. And I know how to market. But real estate is way more competitive. So I figure I could take a fraction of a real estate marketing budget, apply it to this business instead, and we could get a huge return on it.” Brian knew he could help Darren make more sales and scale his business. “You apply everything that you’ve learned about running a real estate company that’s cut-throat when it comes to marketing and sales, with high-dollar entry and huge customer service. You apply that customer service focus, plus the automation, the technology – I used to be in the tech sector, too – I’ve always been of the mindset of making things more efficient. You put that into a product that people need. And you hire the right people. It’s all a formula.”

That’s how, in August 2013, Brian and Darren sat down to start talking about roles and figure out how it was gonna work. Fortunately, they quickly realized it would work. Summarizes Darren, “He has all the strengths I don’t have, and vice versa. And between the two of us, we never get in each other’s way. From the very beginning we sort of set our roles, and we take care of those roles.” He continues, “The roles that we play are completely different. They both require an extraordinary amount of attention. He’s bringing in the business, and then I deliver it.”

Neither Darren nor Brian like fancy titles. Under duress, however, they characterize themselves as “Operations General Manager” and “Director of Sales and Marketing,” respectively. Over the past five years, the partnership has proven to be exactly what Liftech needed. Says Darren, “I don’t think we could get to where we’ve gotten with just one of us.”

Brian agrees wholeheartedly, adding that it helps that they never really butt heads on anything – and when they do, it’s nothing that can’t be resolved within an hour.

Act Four: Agreeing on a Philosophy

It also helps that Darren and Brian fully agree on the overall philosophy that guides how Liftech does business. As Brian explains, they drive the company by always “putting others first. Both your customers and your employees. And delivering. The most important thing is people being satisfied. And we try to make it as enjoyable as environment as possible for our people.”

Darren adds, “We are inherently driven to do a good job. It’s not because of the money. When you care about what you do – not just pretending to put customers first – but really doing it, because it literally means the world to you do a good job. Because you care about that, and you make sure that the people that work for you realize that.”

Darren and Brian’s well-balanced partnership and guiding philosophy provide a strong foundation for their business, as evidenced by Liftech’s loyal, hard-working, customer-focused employees and the happy customers their team helps them to cultivate. (Check out what some of Liftech’s highly satisfied customers have to say on Google, Yelp, the Better Business Bureau, TeamDaveLogan.com, HomeAdvisor, or Liftech’s website testimonials.)

While the business keeps Brian and Darren incredibly busy (and Brian continues to do real estate on the side), they still make time for non-work activities. Their families are close, and they often plan trips and activities together, going off-roading or camping or just having a barbecue together. Darren and his wife Emily, a dental hygienist, have – in Darren’s words – “four totally crazy mal-behaved kids who are the absolute best”: 6-year-old twins Jack and Charlie, 3-year-old Will, and Kate, who’s 11 months old. Meanwhile, 9-year-old Avery and 8-year-old Evan complete the family circle for Brian and his wife Brenda, a marketing communications consultant. Brian, Brenda, Avery, and Evan are all avid players of card and board games, and Avery is already an accomplished lead singer in an all-girls punk band.

Lesser friendships might not have withstood all that Darren and Brian have gone through together, both personally and professionally. Fortunately, both their friendship and their business seem to thrive on the yin and yang of their skill sets and their personalities. With their unwavering trust in each other as a foundation, they’re on the road to partnership success – a road, of course, underpinned with concrete.

Total years of work experience: 30 years of professional construction and homebuilding experience, though he’s been building things (e.g., forts, treehouses, benches for his mom) since the age of 6

Favorite thing about working for Liftech: “Being in charge of making a difference. And fixing things. At the end of the day, it feels good to be a part of something great. We’re fixing things. We’re not building things, but we’re fixing them. We make people happy.”

Before Liftech I was: Working as a homebuilder and a real estate agent

My personal motto: “Be your best you. I’m constantly reflecting on how I can be better.” He adds, “Oh and don’t be prideful. Pride sucks.”

In my spare time, I like to: “Spend time with my family.”

Something people don’t know about me: I have a 3rd nipple “A Nubbin”

Role: Director of Sales and Marketing

Total years of work experience: 34, given that he started his first business – a lawn-mowing enterprise – at the age of 9

Favorite thing about working for Liftech: “I like to provide opportunities to other people. I’ve always wanted to do that. At a very basic level, I really like to help other people. But I don’t have time to do the soup kitchen thing, and I don’t have time to do those other super warm-and-fuzzy things. But I still serve a purpose in this world in that I help people put food on the table. I help them take vacations. I help them buy toys for their kids. At Liftech, we’re into giving back to our employees. It makes me happy when we get together with our employees and I can look around at all these great people that depend on us and make their living this way.”

Before Liftech I was: Working as a real estate agent (something he still does part-time)

Favorite vacation destination: “Anything quiet and on the ocean. Off the beaten path. Any vacation doing nothing, really.”

My personal motto: “I always try to be a better person than those around me.”

In my spare time, I like to: “Play games with my wife and kids. Drive fast in cars. Do nothing when possible.”

Something people don’t know about me is that: “I almost died when I was an infant. I had some rare disease where, after you’re born, your head starts filling with fluid. If they don’t stop it, eventually, because of the pressure, it’ll press your brain. They put ports in my heads to relieve the pressure. I survived. Obviously I’m good now. But people always comment on how big my head is. My cranium size is off the charts. I can’t ever find an off-the-shelf baseball hat that’ll fit me!”

Get a free on-site estimate
Powered by Top Rated Local®